I have been involved in re-homing dogs for the past 12 years, mainly goldens, but also Labs, Pekes and various other breeds through a wide network of contacts.

We re-home on average 25 Goldens a year.

A lot of the dogs I re-home, are because they have been sold to the wrong homes. Some breeders are only interested in the money, and don't take the time to question and talk to the prospective new owner.

Goldens are people dogs who need company most of the time. They need to be allowed in the house as part of the family. They are intelligent dogs and may get bored easily. They need stimulation by being taken for long walks, obedience lessons, field work, etc.

Last year I re-homed a 9 month old dog because he was boisterous and destructive due to boredom. He had destroyed the garden knocked people over and chased chickens on the property. I placed him in a home where he was allowed in the house, taken for walks and given an abundance of love. His new owner told me that he has been as good as gold and was a real pleasure to have and that all her chickens were safe in the freezer!

Please think carefully before buying a Golden puppy! Do your homework, find out all you can, and remember, a puppy should be for life! If you would like some more information on the needs of a Golden Retriever, please mail me, I will be happy to offer you some advise.

We have a rescue dog called Bumble. She was brought to us just over 2 years ago, 3 days before she gave birth to 11 puppies.

She was very nervous and traumatized at being abandoned by her owner. We planned on finding a home for her once we had homed all her puppies, but she loved and trusted us, and we decided to keep her.

Snipe - our first re-home, was a dog who was 'vicious'. He had no human contact because he had bitten his owner, was kept in a separate paddock at the bottom of the garden. We took him home, but only kept him for a day before we had to put him in kennels. We were lucky to find an animal psychologist in Durban who succeeded in turning him into an acceptable pet and shooting dog.

The second dog I re-homed was a 4 year old bitch from kennels in Pretoria. She was to be used as a breeding machine, but was so miserable, and in such poor condition that she never had any puppies. Someone saw her, took pity on her and called me. That was the start of the Golden Retriever Rescue Fund. We needed funds to pay for her, have her spayed, and find a home. I have been working with the Golden Retriever Club, re-homing dogs since that day.

A recent success story was an 8 year old dog, and a 10 year old bitch needing a home together as their owners were emigrating to New Zealand.

I though it would be impossible because of their ages but found a lady who offered them a home, although she was worried about the financial implications. The owner of the dogs offered to pay for their food and vets bills, if she would give them a loving home.

The dogs have settled in happily and the owner keeps in regular contact and pays all their bills.

That is what I call a very responsible and caring owner.

If you know of a Golden needing a home, or can offer a home to one, please contact me 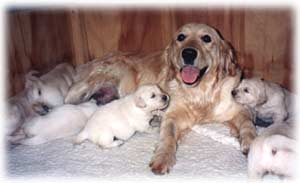