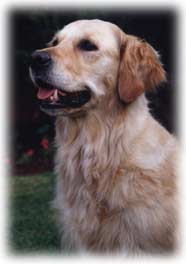 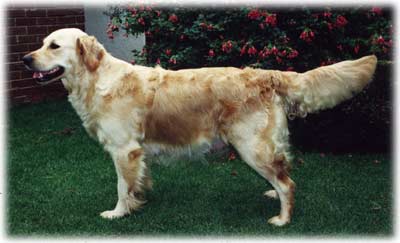 Our beloved Tess was put to sleep on the 11th August after she suffered her second stroke and could no longer walk. She would have been 14 on the 20th December.

Tess was a “Christmas Present” from Margaret to me, I was forbidden by a specialist from playing squash and Margaret decided I needed a different sporting interest. Therefore we got Tess, who was my introduction to Field Trials. Tess loved both showing and field trialing and had she had a more experienced handler could have gone a lot further, notwithstanding me she proved herself to be a dual purpose “Golden”.

In the show ring she won 6 BOB's, 3 Reserve BOB's, 13 CC's & 3 RCC's. In the field we placed 2 nd in 2 Maiden Stakes and she achieved her FQ & NHR Qualifications. At the GRC Annual Awards of 1996 she won Top Show Bitch and Dual Purpose Golden, in 1997 & 98 she was again Top Show Bitch as well as “Dog of the Year” Qualifier and also Top Brood Bitch as her progeny performed in show and field. She also qualified in Novice at Obedience and in her old age obtained her Canine Good Citizen Award.

Tess really enjoyed her field trials and would quiver with excitement when she was in line but had the rare quality of being totally relaxed between retrieves. All the field dogs loved Tess and would jump into the back of the car to be with her. It was once suggested that she must be the “Cindy Crawford” of dogs as one particularly randy black lab pestered her yet again. She had a lovely temperament, hated any confrontation and was our peacemaker; she would stand between any 2 dogs that were looking for a fight and stop them.

Tess had three lovely litters, the first from Sue & Ches Greenwood's Codders. Sue & Ches drove up from Cape Town for the mating, they took Jess from the resultant litter and we kept Jady, the second was from Julie & Brian Lovell's Chivas and the last from our own Robbie.

Tess walked with us twice a day at Emmarentia until the day before her stroke. We have many wonderful memories and will never forget our darling Tess.